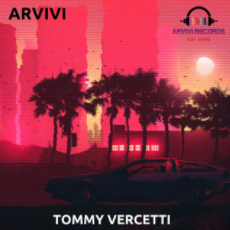 When and why did you start playing?
In 2017 i’ve watched a lot of musicans on youtube, remake of original songs with synthesizers and was very inspired by that, that i’ve bought my own little synthesizer back then. It was a Novation MiniNova, and it teached me how synthesizers & music works.
Than i wanted an big studio synthesizer but saw they were very expensive, so i was searching for emulators or vst plugins that will sound the same and then found Analog Lab 4 From Arturia, where i create (till now) all my music on with a midi keyboard and a gaming laptop.

Which famous musicians do you admire? Why?
Michael Jackson, Because of his allround performance, lyrics and his beats are from another planet! ( thanks to Quincy Jones ! )
Dr Dre – His beats are also legendary and his lyrics even more!
Giorgio Moroder – I love synthesizer music and to me, he is the king of it!

Were you influenced by old records & tapes? Which ones?
Full Albums :
Thriller by Michael jackson
The Chronic by Dr Dre
187umkilla By Eazy-E
Songs : Ohio Players – Funky Worm
Tiesto – Elements of life
Dr Dre – Let Me Ride ( G-funk remix)
Ice Cube – You know how We do it

Do you perform in public? Describe those occasions? Concerts, radio, TV
I was played a few times live on iheart Radio.

What makes this kind of music “good” to you?
The Bassline is to me very important, it sets the vibe of the song ( funky bass or slow bass )
And i prefer it being done with a MiniMoog, that instrument is i dont know.. it just takes the song to another level !

Why did you choose to play this kind of music?
I wanted to make music i would also like to hear and feel

Let’s Talk about your music and your last work…
The Last song I released is called ‘’ Tommy Vercetti ‘’
I was inspired by GTA Vice City and wanted to make a record i believe will fit in the game’s atmosphere.

How do you feel about the internet in the music business?
It is magical what internet could do these days, especially in these ‘’quarantine’’ times i can still reach a big audience, without being actually with a lot of people.

What are the plans for the future?
To grow my record label and myself as artist, to become a platform for other musicians to start their careers & help them grow into that what they want to reach with their music!

How has your music evolved since you first began playing music?
It improved dramatically, the first few songs i’ve created were…. Well… you could hear i was just started haha, but after months of questioning people on how to improve my style, i finally think I found what I like and now I’m pleased with it

Could you briefly describe the music-making process?
It’s a crazy thing, I work mostly with a keyboard and my laptop, and every time I think of a melody or something then I make a sample of it, and after some time ( hours or days ), I measure the bpm and look for drums, leads, keys to combine them together to 1 song
And sometimes I just ask some friends to make weird noises and I put them through a compressor, or edit the background sounds and play them through a synthesizer on my laptop to create new ‘’sounds’’, it is just endless what you can do with music, I believe that if you think by yourself maybe this could sound good.. you just got to do it.